At a ceremony in the Town Hall on Thursday 12th May 2016, Councillor David Long was installed as Mayor of Llandovery for the coming year. He was joined by a macebearer, fellow councillors, dignitaries and guests for a short parade to the Castle Hotel where everyone enjoyed a formal dinner, after which there were the conventional speeches and toasts.

In 1485 King Richard III granted Landovery a Royal Charter which gave the town Borough status. Under this charter a Sergeant-at-Mace was chosen by the Bailiff and a second selected by the Burgesses of the town. Today, Llandovery is proud to have retained these offices.

Les Adams was the Mayor’s Sergeant-at-Mace for 47 years and George Adams served as the Council’s Sergeant-at-Mace for 35 years. They carried the solid silver maces, dating from 1635, in front of the Mayor on all ceremonial occasions. Many years ago, their duties would have been very different, including the arrest of malefactors (for which they would receive a maximum of two pence), collect fines and carry out all sentences imposed by the Bailiff in his role as magistrate.

However, times have changed and in 1835 the title of Bailiff was changed to Mayor. The Mayor was head of Llandovery Borough Council until 1974 when Llandovery lost its Borough status due to local government reorganisation. The new Dinefwr Borough Council wanted to take control of the maces but, after a hard fought battle of words, they remained with the town and are now treasured by Llandovery Town Council.

The older brother, Cyril Adams, was the first member of this family to become a ‘mace bearer’ as we know them today. When his fellow mace bearer became ill, Les stepped in. Later, when Cyril retired, having served for 24 years, George stepped into his shoes. It is difficult to describe just how honourably George and Les fulfilled their roles and carried out their duties with such dignity and pride. Born and bred in the town, their knowledge of Llandovery and its civic history is immense. They are experts on protocol and fiercely protective of the Council and its Mayor.

George and Les are the first to admit that their roles are not all work and no play. Over the years they have enjoyed some remarkable experiences and have met members of the royal family and other famous people such as Viscount Tonypandy. Staunch royalists, they will freely admit that many of their favourite memories have been of royal association. In 1969, Les and his brother Cyril were privileged to accompany the Mayor of Llandovery to the Investiture of HRH the Prince of Wales at Caernarfon castle. Forty years later they had the pleasure of accompanying the present Mayor to a reception at Llwynywermod, the Welsh home of Prince Charles just three miles from Llandovery.

During the last few years, the brothers have defied both age and some health problems to carry out their duties with customary pride, devotion and reliability. Two deputy macebearers were appointed last year under the tutelage of Les and George. The brothers have now decided to retire from their duties in May 2010. Such people are rare nowadays and Llandovery will be forever grateful to them.

Sadly, George Adams passed away on the 4th of July 2010 – he was a true gentleman, dignified and dedicated to his long service as Sergeant-at-Mace. In 2015 Les Adams also passed away and so ends a great partnership between the Adams and Llandovery.

The tradition still carries on with Richard Thomas and Meirion Jones, both of whom have now accumulated a number of years service for the Town. 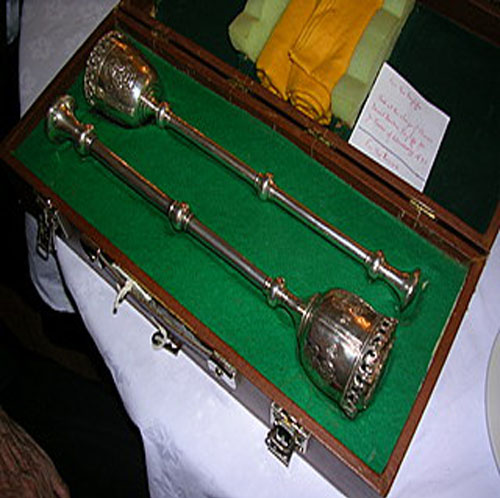 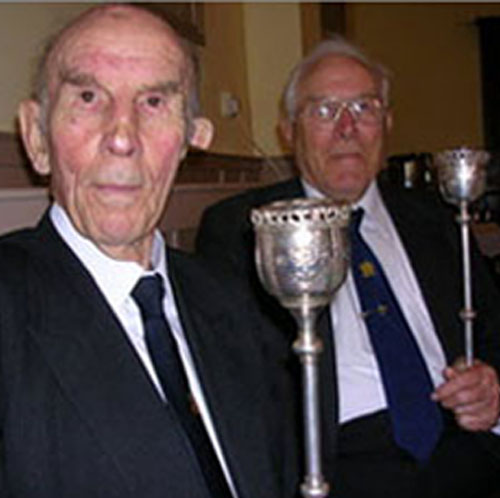